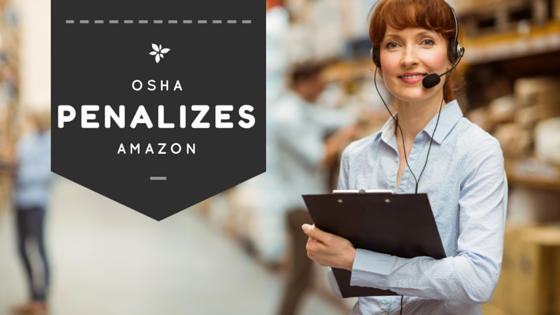 Injuries and employer misconduct occur more often in the construction industry than you may realize. And those who violate safety protocols aren’t only the small businesses no one’s heard about. In the day where OSHA is cracking down on companies harder than ever before, it is a mystery why any business would try to pull a fast one on authorities. Especially top names like Amazon. According to a report made by OSHA, an Amazon warehouse in New Jersey forced employees to stand for the entirety of their 10-hour shifts. They also failed to report 26 work-related illnesses and injuries. An Amazon spokesman disagrees with the alleged accusations, but the full report of employee citations suggests otherwise.

OSHA’s investigation began in July of 2015 for this particular warehouse, but Amazon has been receiving criticism for their working conditions in recent years. The Amazon warehouse in New Jersey has been fined $7,000 for the charges.

The Newest Changes OSHA Will Be Implementing in 2016

Due to the increasing number of employee injuries and inadequate safety protocols, OSHA will be implementing a few new rules in 2016. They will also be increasing fines. Their goal is to try and reduce the number of injuries on the worksite, improve overall safety, and to prevent employers from leaving out important information and not reporting incidences properly.

Take the First Step and Get Your New York Forklift Certification

OSHA may try their best to do all they can to improve workplace conditions, but not every proposed rule gets passed as planned, and bureaucracy can cause rulemaking to drag out. You can educate yourself right now on the correct safety procedures, including OSHA standards, and help to improve the safety of your workplace by completing quality training, like the New York forklift certification from CertifyMe.net. Their online program is very affordable, 100% OSHA compliant, and takes about an hour to complete. It only takes a small change to make a big impact, and you can help encourage others to raise the bar on workplaces and warehouses nationwide.